Percy Phillips moved into 38 Kensington Liverpool in 1925 and immediately converted the ground floor front room of the narrow three storey Georgian terrace in to a shop selling and recharging batteries, which required the installation of large accumulators in the cellar. Previously Percy had been selling bicycles and motorbikes from a small shop in Brunswick Road, Liverpool 7 and this had introduced him to the miracle of batteries.
At the time very few places in Liverpool had electricity and batteries were essential for running vehicles and radios. Percy spent 30 years, some during wartime, when the Kensington area was heavily bombed, supplying batteries and radios to people in the Liverpool area but by the early 1950s he was starting to sell more electrical products than batteries, as most people had electricity by then. Early in 1955 Percy noticed the demand for record players and records was increasing every day and this gave him the opportunity to give up the hard work involved in the battery charging, close the business and start selling records and record players instead. The record shop sold mainly Percy’s favourite music- Country and Western and blues records, Hank Williams in particular and Big Band music, mainly from America. (Percy had supplied batteries to the American air base at Burtonwood just outside Liverpool during the war and had access to all the latest record releases from the States.) Soon, the shop was full of the newly evolved ‘teenagers’, wanting copies of ‘Rock Around The Clock‘.
Later in 1955, having been asked by several customers if he could make demo discs, Percy ‘had a brainwave’ (according to Mrs Phillips) and took a trip to London with his eldest son Frank, who was working there for EMI, returning with a £400 portable recording and disc cutting studio, made in England by MSS (Master Sound Systems). This studio consisted of three large metal boxes just about carry able using the leather handles. One box contained the amplifier with built in speaker powered by a 6V6 valve and a pre amp/mixer attached. One the FC1 ¼ inch reel to reel tape recorder and the other held the CLED3/3 disc cutting lathe. There was also an HMV 2350H 1949 microphone and a Reslo RV Black ribbon microphone, three pairs of headphones, along with a tin of ten inch EMI acetate blanks, which were  aluminium discs coated in an acetate lacquer . All the equipment had user manuals and over the years Percy would make extensive user notes himself. After unsuccessful trials in the rather damp cellar, Percy installed the new studio in the ground floor middle living room, which was about 12 feet square, with a piano, carpeted with a blanket over the door and rear window as soundproofing. (The trams, horses and trucks which ran along Kensington were very noisy). An upturned tin bath remained in the cellar though, with a speaker and microphone in it linked to the studio as a reverb chamber. In 1955, this was all very high tech and state of the art recording equipment. In 1963 Percy upgraded the tape deck with a new Vortexion WVB 3-headed ¼" reel to reel and bought a new AKG D-19 microphone and a Grampian A Type 636 reverb unit, which replaced the tin bath in the cellar. 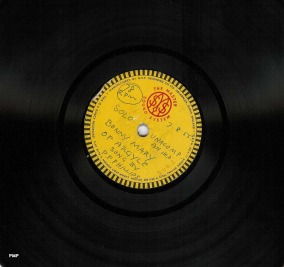 The first recording ever made by Percy Phillips was of himself singing one of his favourite songs, ‘Bonnie Marie of Argyle‘. This was done unaccompanied in the cellar at 38 onto ¼ inch tape. A week later, Percy recorded family friend and local dance band singer Betty Roy singing the hit song of the year, ‘Unchained Melody’, accompanied by Percy's wife Hilda on piano.
The first disc he ever cut on the equipment, on the 7th August 1955, was of those recordings and another he made of his eight year old daughter Carol singing another popular song, ‘Mr Sandman’. Being an engineer by trade, Percy soon mastered the disc cutting lathe and was producing remarkable quality recordings, many of which still sound good today. The improvement in sound quality between the 1950s and 60s recordings is very noticeable. And as many of the musicians who used the studio have said, Percy had a good understanding of and feel for music and always made sure the groups were properly tuned and in the right positions to get the best recording.
Phillips Sound Recording Services was soon a very busy studio, mainly recording popular music compilation discs to be played at the local ice rink; messages to loved ones at home or abroad; children playing the piano; local peoples’ pets’ sounds (for example: a budgie singing ’Rule Britannia’) and increasingly, young men playing skiffle music. Liverpool musician Tony Allen, who sang with the Blue Mountain Boys, made one of the first skiffle records at Percy's Studio. Tony remembers, '...a friend called Eddie Seize went with me and I made a recording in that little room. It was fascinating to hear my voice on a record. Percy told me to do another song on the other side and not to waste the space. I remember it was ten shillings a side. I have not played it in years and God knows what it will sound like now. According to my Navy discharge book it must have been between 27th Feb 1956 and 27th March 1956...'  By 1957, some days there would be a long queue of young men with their washboards, guitars and tea-chest basses lining up along Kensington, waiting to enter the studio and play their music into Percy’s microphone onto tape and ultimately onto an acetate disc.
Incredibly, Percy Phillips was in his 60s by this time and had to endure the occasional good natured taunt of ‘Hey Granpa’ but he, the studio and the record shop were very popular. Mrs Phillips, as well as serving in the record shop also ran a boarding house on the middle floor of No. 38 (the family lived on the top floor). Her guests included many actors and theatrical performers of the time who were working at the ‘Playhouse’ or the ‘Empire’ theatres, including actors John Thaw; Terrance Knapp and Richard Briers and ventriloquist Ray Allen and Lord Charles.
The tin bath reverb unit was replaced in 1960 with a new Grampian electric spring reverb and the same year Percy started using 7 and 8 inch aluminium/acetate blanks instead of 10 inch and cutting them at 45rpm instead of 78. He also changed the studio ‘Kensington’ disc label design regularly.
Percy Phillips closed the studio in 1969 and the record shop in 1974, for a quiet retirement with Hilda, who was glad to get her ground floor back. Percy died after a short illness, in 1984 and is remembered by many Liverpool people as much more than ‘the man who made the first Beatles record’.
It’s an amazing coincidence that at around the same time Percy Phillips was opening his studio, another pioneering Phillips was opening another recording studio on another continent. Sam Phillips (no relation) opened Sun Studios in Memphis, USA and recorded Ike Turner; Howlin' Wolf; Junior Parker; BB King; Jerry Lee Lewis; Johnny Cash; Carl Perkins and of course, Elvis Presley. Sam Phillips was quite a young man at the time and loved the music, he signed the artists up and became a massive influence in Rock and Roll, whereas  Percy Phillips had no interest in signing anybody up as he believed Rock n Roll was only a passing craze and couldn’t see any future in it.

Clockwise from left. Merseybeat legend bassist Owen Clayton at The Percy Phillips Exhibition in Liverpool 2018. Owen made a disc at Percy's studio in 1957 with his group Derek Clayton Skiffle. See log book entry. Percy Phillips in 1977. The studio equipment on display in Japan in 2018, photo by TetsuRo Hamada. The studio equipment in 1990, photo by Peter Phillips. Two local newspaper adverts for the studio in the 1950s. The studio mics and Bakelite headphones in 1990.

Back to top of page