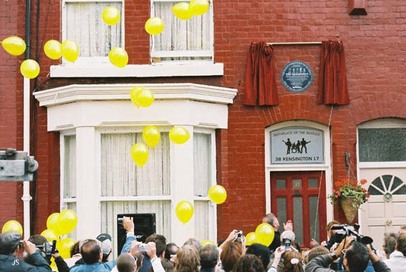 On the 26th of August 2005 a ceremony took place to unveil a Blue Plaque on the front wall of number 38 Kensington, Liverpool, to commemorate the recording there of the Quarry Men Acetate in 1958 and to remember the site of Phillips Sound Recording Services. The whole area was brought to a standstill by the huge numbers of local people; Beatles fans; celebrities and Worldwide media who had flocked to the scene. Percy Phillips' grandson Peter remembers the day well and tells us about it here...

On the morning of Friday 26th as we drove past 38 Kensington, looking for somewhere to park, Council workers were putting crowd control barriers up and a few vehicles and people were already assembled. The place looked great. The house had been freshly painted brick red, the front door dipped and painted red with new brass letter box and knocker, same next door at 36. A nice conical flower basket with red flowers in it hung on the wall between. Lots of yellow balloons were harnessed to the railings outside and a large PA system was playing ’That’ll Be The Day’. The Plaque was hidden behind orangey velvet curtains above the front door and a glass panel over the door said ‘BIRTHPLACE OF THE BEATLES, 38 KENSINGTON, LIVERPOOL 7’ with a silhouette of the Fab Four etched onto it. This was really nice. I took a photo. Photographers were snapping away as Carol (Percy’s daughter) and me got interviewed and chatted to people including the old neighbours Ken and Sheila, who I remembered too. Grandma (Percy's wife Hilda) couldn't come as she's 96 now and felt unable to travel to Liverpool from her home in Prescot. She was very pleased though when she heard about the Plaque and we told her all about the day when we got home. John Lowe, Colin Hanton, Julia Baird; bassist Owen Clayton and several other guys who'd made discs in the studio (and still had them!) were there and at last Billy Butler arrived, made a speech, then him, Julia, Carol, John and Colin pulled the cord and everyone looked up to watch the little velvet curtains part and reveal the beautiful Blue Plaque, very Monty Pythonesque. The yellow balloons were released, we all watched them fly skyward over Liverpool and everyone clapped and cheered. It was a very proud moment. Imagine how it must have felt to Colin and John, standing there outside number 38 holding a replica of their first recording efforts nearly fifty years later. God bless Grandpa. Unbelievable really. After all this time, this was the ultimate recognition of Grandpa. After the unveiling, John Lowe and Colin Hanton were presented with miniature versions of the plaque by Richie Keenan from Kensington Regeneration, everybody mingled and chatted then the Quarrymen and us family were put onto an open top double decker bus while the other guests got on the Magical Mystery Tour coach and we went on a Mystery Trip eventually arriving in town within a few grooves of the Anglican cathedral at the Pilgrim pub, where wine was free and a big lovely nosh was laid on. A Beatles cover band started doing really good music (it was Digsy from Cook Da Books) and we all had a really great time, boozing chatting laughing and reminiscing. At some point they gave us all ’goody bags’ in which were Percy Phillips mugs and T shirts. What an excellent day.

As some people noticed that day in 2005, there were some mistakes on the new blue plaque. Most importantly, the date of the Quarry Men recording was wrong and the image of Colin Hanton was not an image of him at all. It took until the property was renovated in 2011 for the correct image of Colin Hanton to be put on the plaque. Also during the renovation, the original front door of number 38 was removed and sold at a Beatles auction at Liverpool Institute of Performing Arts (LIPA) to the Museum of Liverpool, where it is now on display.
In 2018 Peter Phillips and Speakeasy Recordings commissioned a new commemorative blue plaque for The Percy Phillips Studio Exhibition at the Liverpool Beatles Convention. The plaque was designed and manufactured by Alf Menzies of Northern Design Unit and unveiled at the Exhibition on 26th August 2018 by Percy's daughter Carol Higgins and John Lennon's sister Julia Baird. A limited edition of 10 miniature replicas were also made for sale at the Exhibition.
​

​Back to top of page