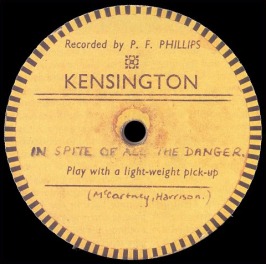 The most famous recording made at Phillips Sound Recording Services is by John Lennon’s Liverpool skiffle group, the Quarry Men. The 10inch aluminium and acetate disc was cut by Percy Phillips (according to the Studio Log) on the 12th July 1958, at a cost of eleven shillings and three pence (11/3). There is some debate about both the date and the price of the recording, as the various people who were there have different recollections.
The commemorative Blue Plaque on the front wall of 38 Kensington claims it was 14th July 1958. But it is generally agreed by the remaining Quarry Men, that it was Saturday 12th July 1958. (In his 2018 memoir, 'Pre:Fab!', drummer Colin Hanton specifically remembers the day and confirms the date as 12th July). According to the Studio Log, the cost of the session was 11/3. John Duff Lowe, pianist for the Quarry Men remembers it costing 17/6. 17/6 was the price of a recording made first onto tape and then onto disc, which allowed some room for mistakes by the performer. But as the Quarry Men didn’t have enough money between them, they had to play directly onto disc, so the price was almost certainly 11/3. This unique and priceless recording of two songs by the Quarry Men (John Lennon, Paul McCartney, George Harrison, John Duff Lowe and Colin Hanton), playing three acoustic guitars, piano and drums, is the first record they ever made and the only disc the Beatles ever made in Liverpool. On the 'A' side is the Buddy Holly song ‘That’ll Be The Day’ and on the 'B' side Paul McCartney and George Harrison's first ever composition (and indeed the only song they ever recorded that was credited to the two of them only) ‘In Spite Of All The Danger’.
In 2005, a Blue Plaque was installed on the wall at 38 Kensington to commemorate this recording and the site of the studio.
George Harrison's close friend Arthur Kelly remembers another visit to Percy's studio. It was between January and May 1960. Arthur remembers he was present at the session when John, Paul and George, with three guitars, cut a single sided acetate of John Lennon's song 'One After 909'. Arthur is sure of this because he remembers having the disc for a week, during which he played it to various friends. However, the disc has since disappeared.

Although the Quarry Men disc is the most famous recording made at Percy's studio, during the fifteen years that the studio was open, Percy made thousands of discs for local people, including location recordings of the local church choir in Kensington; wedding ceremonies; messages to loved ones; children singing; parrots and dogs; family occasions; radio broadcasts; football matches; skiffle groups; Rose Queen ceremonies; school choirs; Rock n Roll groups and country singers amongst many others. Percy kept careful notes of all the recordings he made in his studio log book. The log books and many of these discs survive today in the Phillips family archive.

In 2018, Percy's grandson Peter Phillips released a 4 CD box set and limited edition 10" double vinyl (with Speakeasy Recordings) of Percy's archive of discs, at a special premiere and exhibition of artefacts from the studio, during International Beatleweek in Liverpool. The Percy Phillips Studio Collection is a fascinating anthology of recordings made at the studio, including unheard material along with discs by Ken Dodd; Billy Fury; The Quarry Men and the Beatles. Peter also published a book containing the history of the studio and detailed sleeve notes for the Studio Collection.

Below are images from pages of the Phillips Studio Log.
On the left is the entry for the 12th July 1958. 'Skiffle. 10inch double sided. Direct. 11/3'. Quarry Men.
On the right an entry from the 15th October 1957. 'Ken Dodd 12 inch. Single sided. Tape to disc. Off air.' The phrase 'off air' means this was a recording made from a radio broadcast.
'Ham' which appears twice on this page, was Percy's word for an actor. 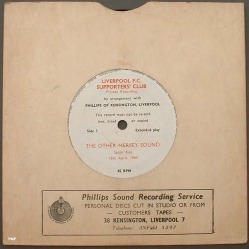 During the 1950s and 60s thousands of Liverpool people used the studio, including Ken Dodd; Tony Allen; Betty Roy; Billy Fury; Johnny Guitar; John Lennon; Brian Epstein; Freddie Starr; Marty Wilde; Willy Russell; The Swinging Blue Jeans and Liverpool and Everton Football Clubs. All Percy’s records came in a white, green or brown cardboard sleeve with the ‘Phillips Sound Recording Services’ stamp on the front, whether they were hits bought in the record shop or demo discs made by members of the public. The exceptions to this were special edition recordings which always had a specially printed or typed label and cover. Many of the discs Percy made for customers at Phillips Sound Recording Services are still in good condition today and a CD of recordings is soon to be released. Some of the artists featured include Percy Phillips; Betty Roy; Ken Dodd; Johnny Guitar and Paul Murphy; Harry Wardle; the Quarrymen; Billy Fury; Denny Seyton; Mike and The Thunderbirds; Everton FC players singing; Liverpool FC Kop singing and chanting and a number of recordings appearing on CD for the first time. The 'Phillips Acetates' CD will also contain a history of the studio; photographs and interviews with the Quarrymen; Paul McCartney; several Liverpool musicians who used the studio and Percy's grandson Peter Phillips.

Back to top of page